Home/Crossing the Mona Passage: The Scary Truth
Previous Next

In this episode, Nick and Kelly cross the Mona Passage. It took them 29 hours of dodging canoes and an incident with a fishing net. After exploring the West coast of Puerto Rico, they head East along the Southern coast of Puerto Rico. Since the journey is dead east, it’s best to make small “jumps” before the trade winds start blowing. The plan was to leave at sunrise and go until 10:00 am.

Nick and I had planned to stay at Puerto Bahia in Samana for at least a few days. As soon as we were settled into our slip, off we went to catch up on some sleep. After a short nap, we looked at the weather. The current weather window was closing up, and that left us with a decision to make. Do we stay in Samana or do we make the dreaded crossing of the Mona Passage? If we stayed in Samana, we knew we would be “stuck” there for a good two weeks. While Puerto Bahia would be a lovely place to catch up on work and relaxation, in this case, our wallet would not be happy. It was also late in the season, and it was getting harder to reach the Virgin Islands. The decision became clear; we were going to go for it! 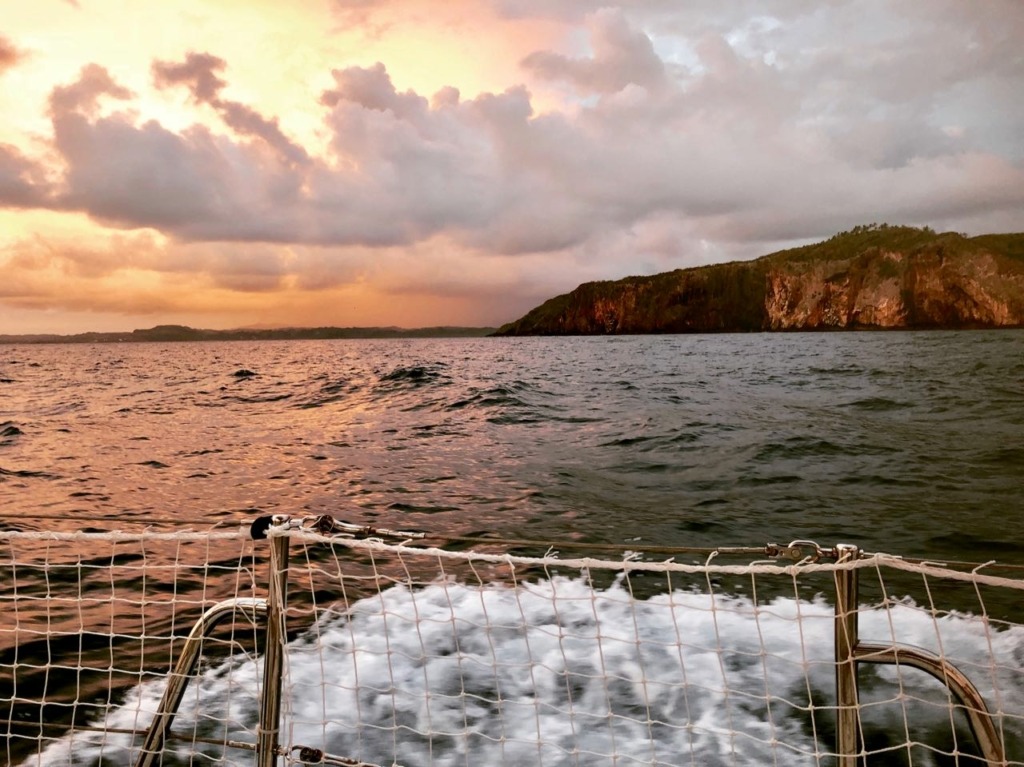 Sailing the Northern-Coast of the DR

Fun before we crossed the Mona Passage

We had a little over 24 hours to enjoy the marina. After taking a much-needed snooze, we headed for the pool to meet our friends Alex and Kareena. To our surprise and delight, there were five pools in Puerto Bahia. Kareena already scoped out the best pool, and we agreed! The infinity pool sits at the edge of the marina with a backdrop of the beautiful Dominican Republic mountains. I was quick to order a Pina Colada, which is the perfect pool cocktail. There we all were, sitting in this beautiful pool with gorgeous scenery having a few laughs. It was the perfect afternoon. 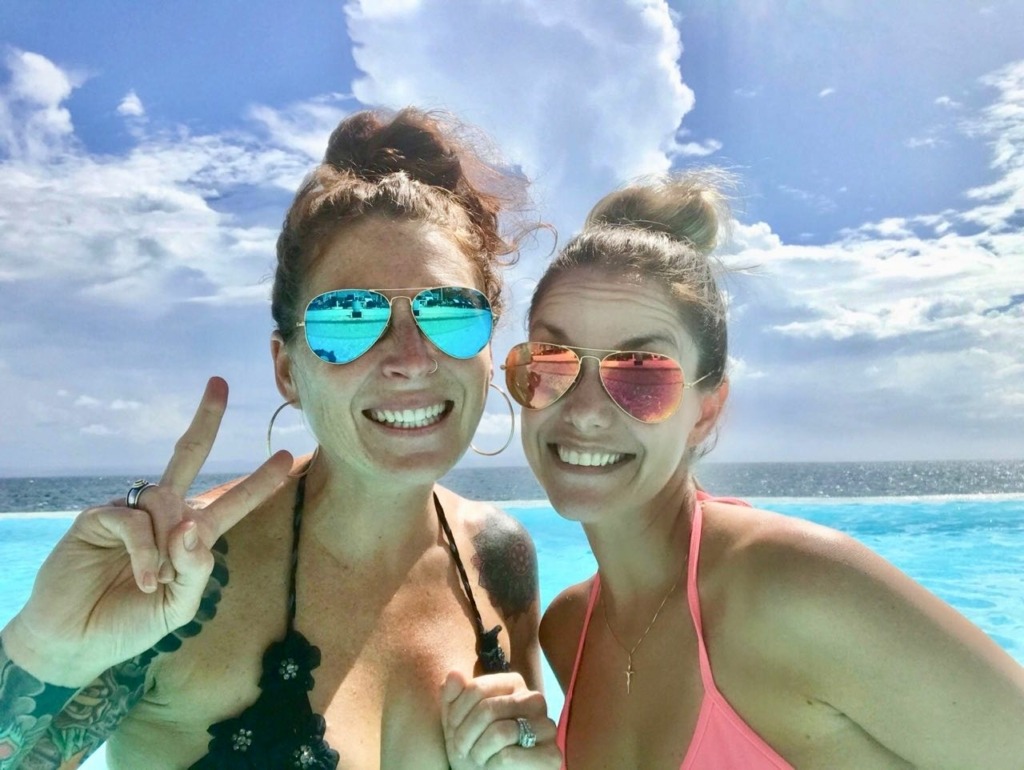 Neither Nick or I were in the mood to cook. It was time for a splurge! The marina restaurant (downstairs) was a good choice for pizza. If you know me, you only have to say pizza once! The meal was lovely and paired well with red wine. How can you go wrong? After dinner, we were happy to go back to our air-conditioned boat, pop in a movie and pass out. We slept like babies!

The next day was “prep” day. Our departure time was 5:00 pm. Satori was mostly ready; however, she needed a good scrub and rinse. After breakfast, we spent a couple of hours cleaning the boat and stowing away everything in sight. There are so many horror stories about the Mona passage that we wanted to be over prepared. We had approximately two hours to relax before casting off the dock. Before we set off for the Mona, a stop at the fuel dock on the way out was a must. 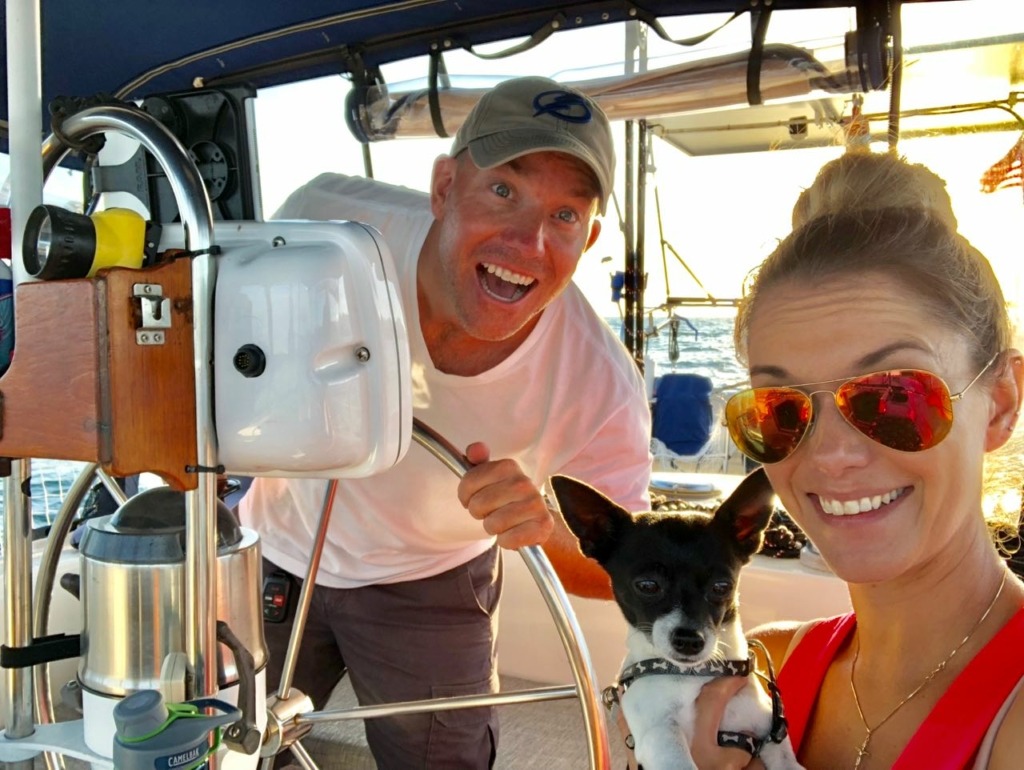 True to Satori style, we were running an hour late. On our way out of Samana Bay, we had a close call with two kayaks. They came out of nowhere! It almost seemed as if they were chasing us, maybe to check out the boat? Either way, we were thankful to have a little bit of light. Otherwise, it could have been a disaster.

The first night of our crossing

Our night was a bit rough. The seas were messy. Instead of bashing straight into the waves, we tried tacking back and forth to ease our ride. It didn’t help much. What did finally help was when we went close to shore. It was a huge difference. Before that, we were thinking of bailing on the Mona Passage as we didn’t want to be miserable the whole trip as well as saving Satori from a huge beat.

As the morning approached, we made the decision to keep going instead of ducking out. As we were heading east, we caught a fisherman’s net in our prop! Luckily Nick threw the boat into reverse and out came the web. The fisherman was in a canoe and was super friendly. He offered us some fish for our troubles, but we kindly said “no thanks.” It would have been too difficult to try and grab his fresh catch, as much as we wanted to. 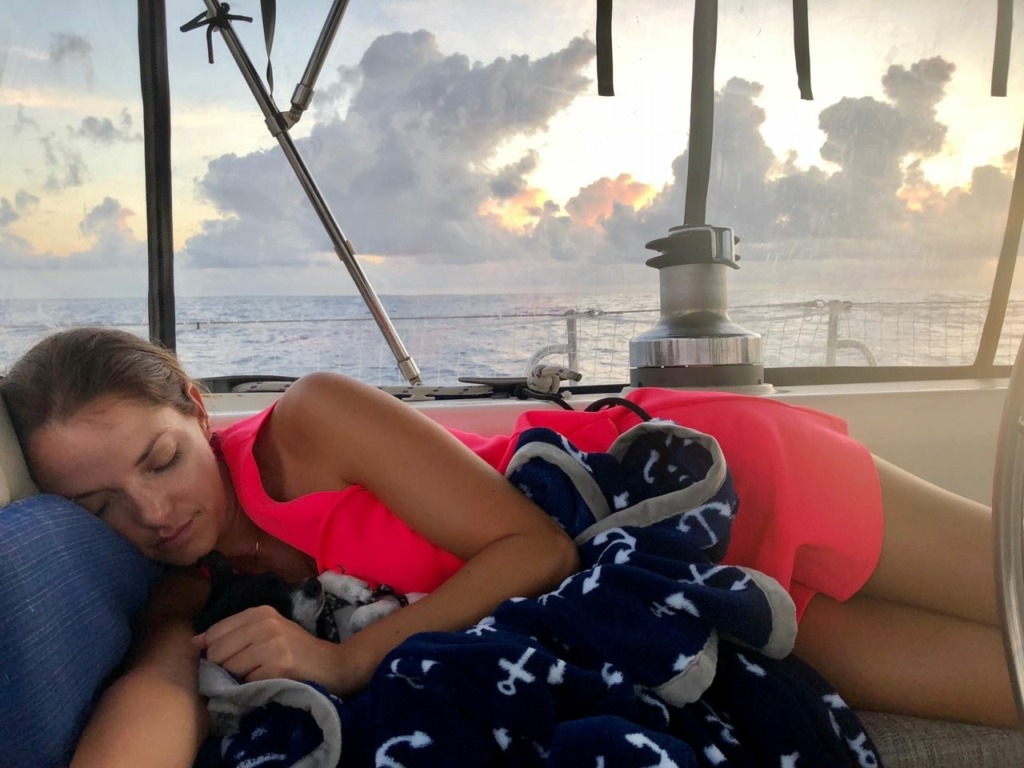 Kelly and Arthur taking a nap on the Mona Passage

About an hour after we started towards Puerto Rico, the conditions became almost perfect. The wind shifted North which gave us a beam reach. We were able to sail for most of the day. After the sunset, the wind pretty much died. We turned on the engine and plowed forward. Nothing exciting happened throughout the evening, which is how we like it!

We made it to Puerto Rico!

We finally arrived at the edge of Puerto Rico around 11:00 pm. That made our passage right around 29 hours. Not terrible for the first time we hear. Since this was new territory, the decision to drop the hook outside of the channel was obvious, in about 30 feet of water. We were both exhausted, and it was time for a full nights rest.

At 7:00 am the next morning, we pulled up anchor and headed for Marina Pescaderia in Puerto Real. We were greeted at the front desk by Jose, the owner of the marina. Jose is delightful and the most helpful guy we’ve ever met in this cruising life. He is willing to help with just about anything, even bringing a package to you after you’ve left the marina or even Puerto Real! Jose will go out of his way to make you feel welcome and also give you some soup from the local restaurant.

As for the town of Puerto Real, there isn’t much within walking distance besides a few restaurants and a bakery. Renting a car from Marina Pescaderia is convenient and affordable. If you want to go to Home Depot, hardware store, marine store, or just any store in general, it’s best to rent a car for a day or two. We ventured to the Mall and also caught a movie at the local theater. What a treat! 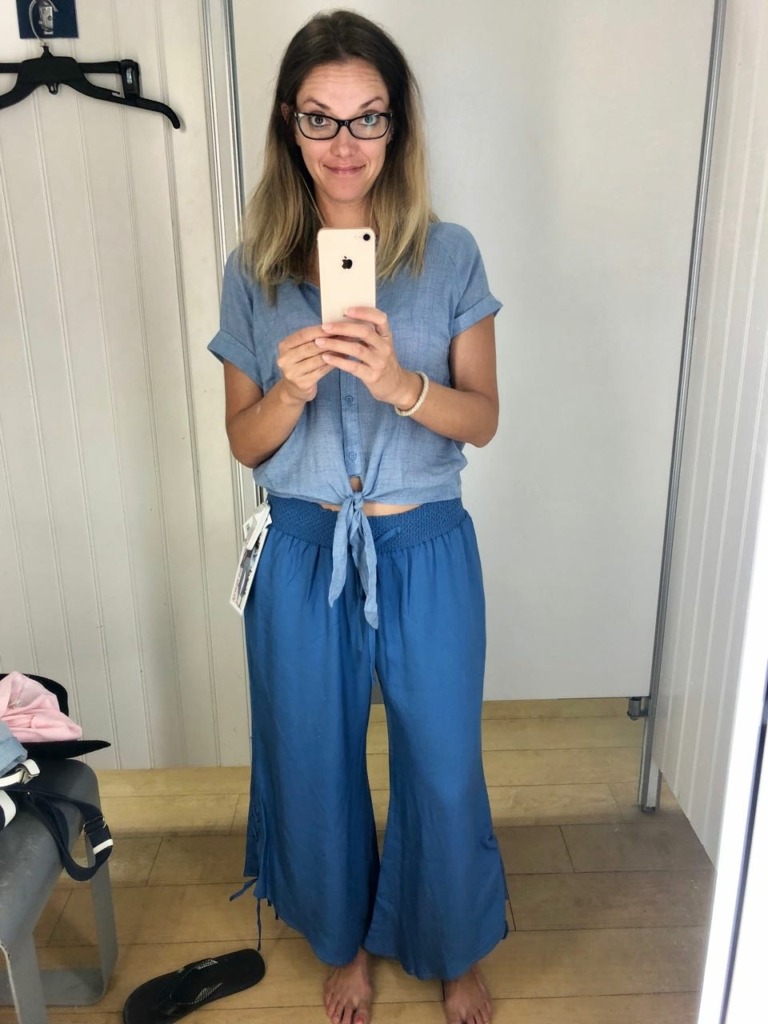 Our friends Ryan and Sheena on “Seas Life,” invited us to go on a road trip to the surf town of Rincon with them.  With the intention of surfing, we headed to the beach. Unfortunately, there were no waves that day. However,  it turned out to be a fun day. We started with breakfast at McDonald’s. Although Nick and I do not frequent fast food restaurants very much, there’s something magical about going to a place from “home” that you haven’t seen in months. It’s a comfort thing. Of course, we also found the Cheeseburgers for lunch! 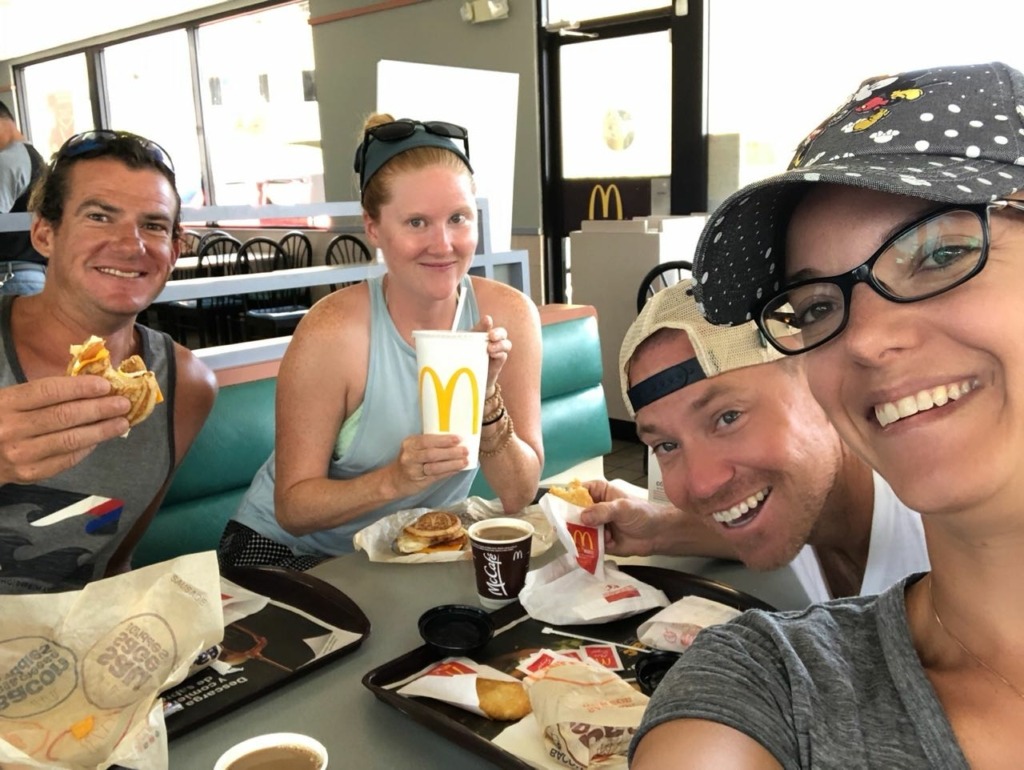 After spending a few days in Puerto Real, it was time to keep moving. The next stop was about a 45 minute motor around the corner to Boqueron. This charming beach town turns into a party on the weekends. Luckily, we went on Friday and Saturday. While we didn’t indulge too hard in the party scene, we checked out a few spots and even danced in the street to the famous Puerto Rican salsa music.

The next stop on our Puerto Rican southern tour was La Parguera. We only stopped for one night but checked out the salt water pool and small island park nearby. The next day, we headed to Ponce. Again, we only stopped for one night, so we didn’t see much of the town. We did, however, make it to the grocery store via Uber. It was cool to see Uber was available in Puerto Rico, only in certain areas though. 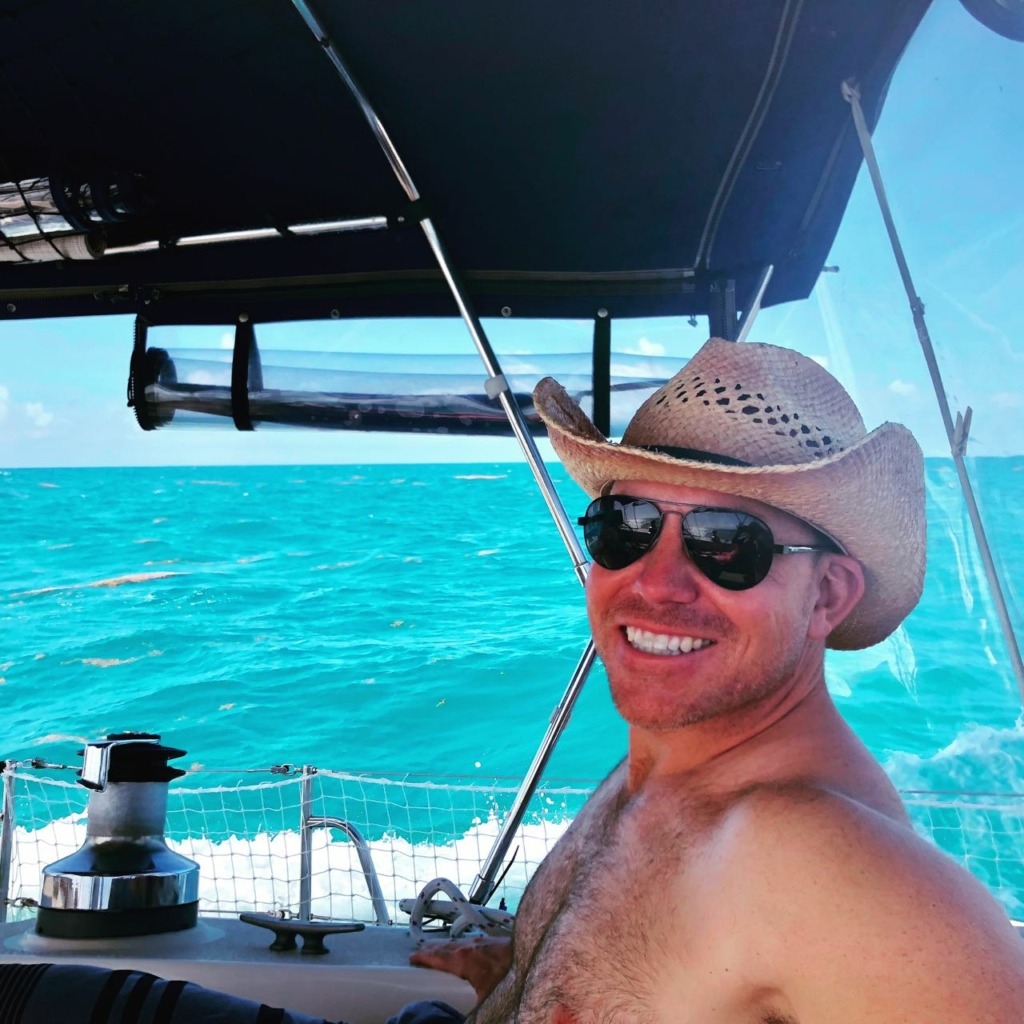 Our final stop before heading to Old San Juan was Salinas. Salinas is a protected mangrove bay much like Luperon. As we pulled in, the devastation from Hurricane Maria was extremely apparent. There were sunken boats scattered around the Bay. Many of the businesses and homes surrounding the Bay were severely damaged. There were roofs missing and debris everywhere. Salinas was struck hard by Maria, but the marina was still open for business with many of the amenities available. The community in Salinas was great. Locals and cruisers were welcoming and very kind to us. We felt safe leaving Satori there for 10 days as we went to Old San Juan to house and dog sit. 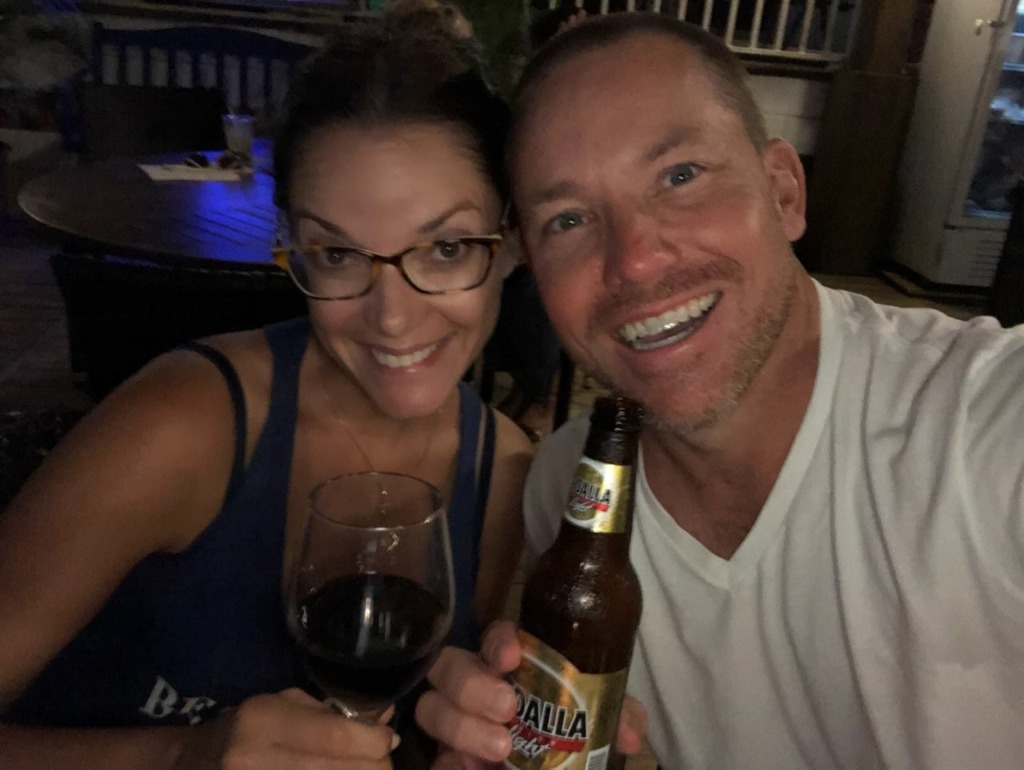 Nick and Kelly in Salinas

Bueno Dias Puerto Rico! We made it ya’ll! 🙏🏻⛵️ #sailingsatori

Our little King is getting used to chillin on the floor! Learning from the #streetdogs 😳😂👑🐶 #kingarthur #sailingsatori