MEET THE CREW OF SAILING SATORI 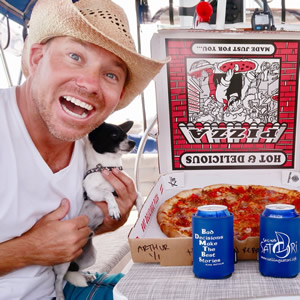 Out of the frozen tundra, Nick was born and raised in the northern midwest state of Minnesota. After graduating as an Industrial Engineer, he spent the next 12 years as a corporate road warrior, traveling for work. He eventually transitioned into IT consulting and started his own business. The freedom of self-employment spawned the yearning for the ultimate freedom.

At the age of 34, Nick sold everything, drove to Florida and moved aboard Satori in late 2014 and began sailing. He spent the next several years working on Satori and teaching himself to sail. He knows one day his time would come to cast the lines and explore the world, but it wasn’t until he met Kelly that he had everything he needed onboard. 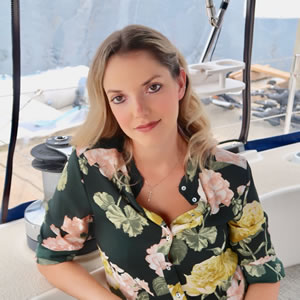 A Tampa Girl born and raised, Kelly grew up in the dance studio. She was nothing less than a ballet prodigy. At the age of 9, she was doing guest spots with acclaimed Miami City Ballet company. By 14, she was teaching classes to girls older than her. Before graduating from high school, Kelly was dancing professionally on an international stage.

Her dancing career took her to Miami and eventually Hawaii. Then, after suffering a horrible accident on stage, she was left with a broken back and career-ending injury. Along with her sister, she would return home to open her own dance studio. Dancing was her passion in life, but she would begin to look for something new. For the longest time, she didn’t know what she was looking for… until she met Nick. 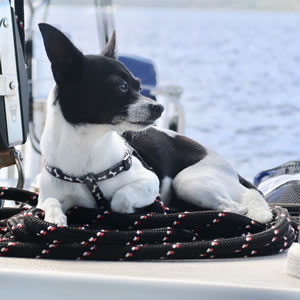 Once upon a time, early in the year 2013, Arthur was born a prince like none other. Just weeks after his birth, he adopted a peasant girl as his servant. The early years were spent molding this servant into the soon to be King’s number one caregiver. Much time and energy was spent training Kelly to take care of everything the king demanded. Treats, gourmet dinners, pee-pee walks and soft blankets on demand.

The King would come to be so coddled and spoiled, that he would refuse to do the simplest of tasks without assistance like jumping into bed or climbing the stairs or getting into the car. He had everything he could imagine, yet, he was not happy. Arthur craved something more out of life. The King wanted to travel the world and have great adventures. This is when King Arthur procured and ship and a captain to serve him on his voyage.

Built-in 1989 on the Gulf Coast of Florida, she was built in the Catalina Yachts boatyard, but under the Morgan brand. She is a 44-foot center cockpit designed by Nelson Marik. Legend has it that they took a racing hull and substituted a the fin keel with a more cruising friendly "shoal keel". She is a well designed, fast, cruising boat.

Satori would begin her life under the name "C'est La Vie". The original owners spent the first few years sailing her locally before doing some major equipment upgrades between 1993-1995, batteries, electrical, watermaker, refrigeration, etc. Satori spent the next years cruising the Caribbean as far south as Trinidad and Tobago, where some skilled woodworking upgrades were installed in the form of shelving and cabinetry. C'est La Vie was sold sometime around the year 2000 where she would find a home in Georgia's St. Simons Islands and renamed Satori. Not much is known of her for the following 10 years, until she was sold again and moved to Marina Jack in Sarasota, FL.

Now named "Destiny," the new owner had aspirations of retiring and sailing to Belize. Unfortunately, during the passage from Georgia to Sarasota, the owner had a heart attack onboard, and never sailed again. Three years later, Nick purchased her with the intention of giving her a new life. "Destiny" on paper, but "Satori" on the hull, Satori would remain her calling.

Satori; Enlightenment, finding a new point of view on life.

https://www.youtube.com/watch?v=ZhV-HQ3wZVI Jump aboard Satori with us as we [...]

The story of us…Nick and I talk about our childhood, [...]