Home/Boat Of The Year – Leopard Catamaran Boat Tour
Previous Next

Ever wonder what it’s like to walk through a Leopard catamaran? The Leopard 45 was voted Boat of The Year by Cruising World Magazine, and it’s no wonder why. Watch this video to get an inside look at this impressive sailboat

If you’re familiar with our youtube videos, you’ll know that we are monohull sailors aboard our “seasoned” 1989 Morgan 44. Satori is a great boat, but she was built in a different time. And even though she has a cleaver layout and many interesting features, she was designed and made in a time before computer modeling was mature enough to have a serious impact on yacht design. (Check out our Satori Boat Tour HERE) 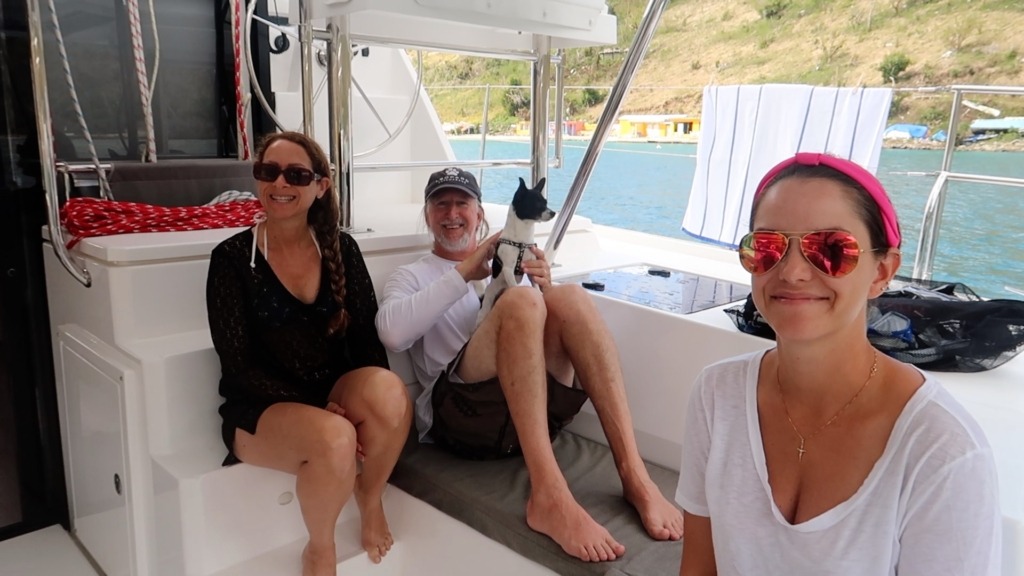 As we were sailing from Florida to the Virgin Islands, our friends Jeff and Adrienne invited us to jump about their boat in the British Virgin Islands. They own a Leopard 45 catamaran that they keep in charter with the Moorings charter company. It was a bit of a push to get there in time to meet them as they would only be in the BVI’s for a short week, but we powered through some less than accommodating weather to experience the sailing aboard a state of the art catamaran like the Leopard 45. You can learn all about our week aboard here. 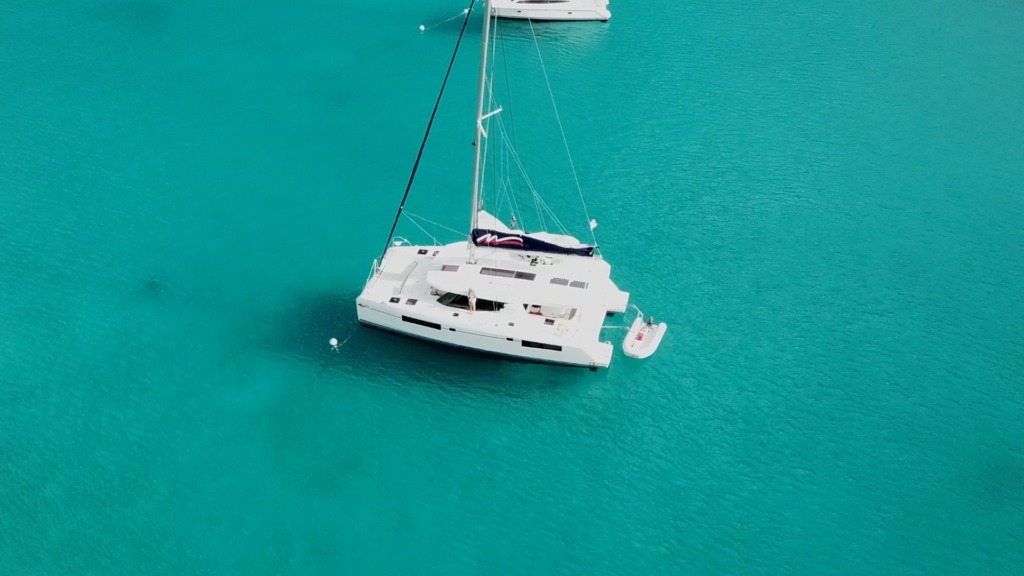 This post is all about taking you on an intimate tour of this beautiful Leopard catamaran. 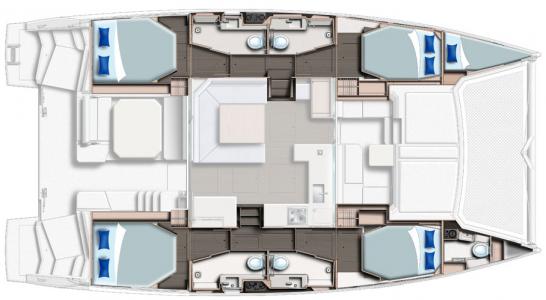 The aft deck is open and inviting with plenty of space for entertaining. This is where we spent most of our time both during the day and at night. It acts as an outdoor living/dining room. The glow from the underwater lights at night creates a fantastic ambiance! 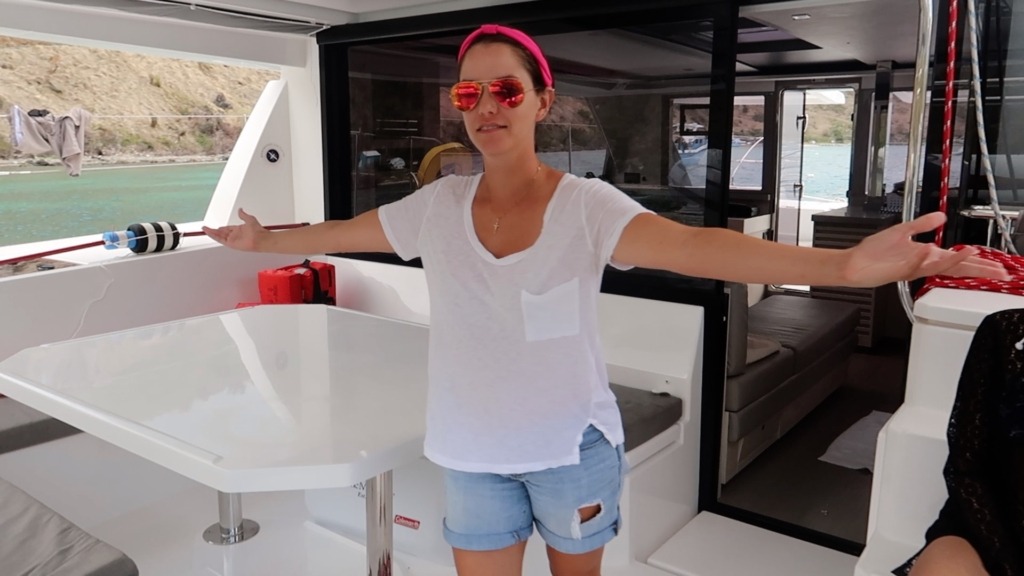 Each hull has a sugar scoop walk down for easy access to the water or dinghy boarding.

The davit system is rigged to an electric motor that drops the entire davit structure and dinghy to and from the water with a push of a button. It’s pretty Slick. 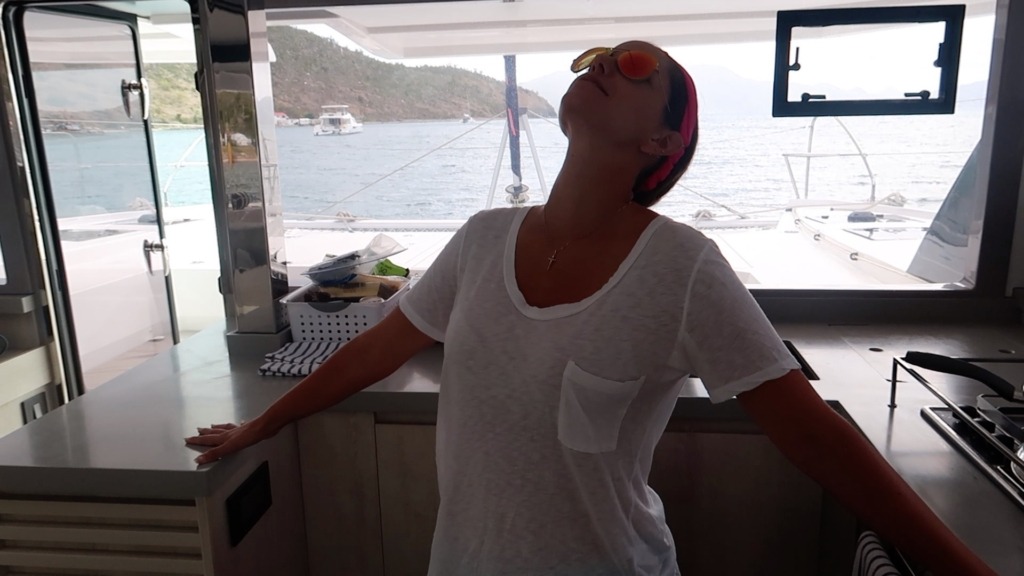 The beautiful thing about Leopards, and all catamarans really, is the open space across the bridge between the two hulls. This gives a large enough area to build an almost house-sized kitchen with ample counter space. 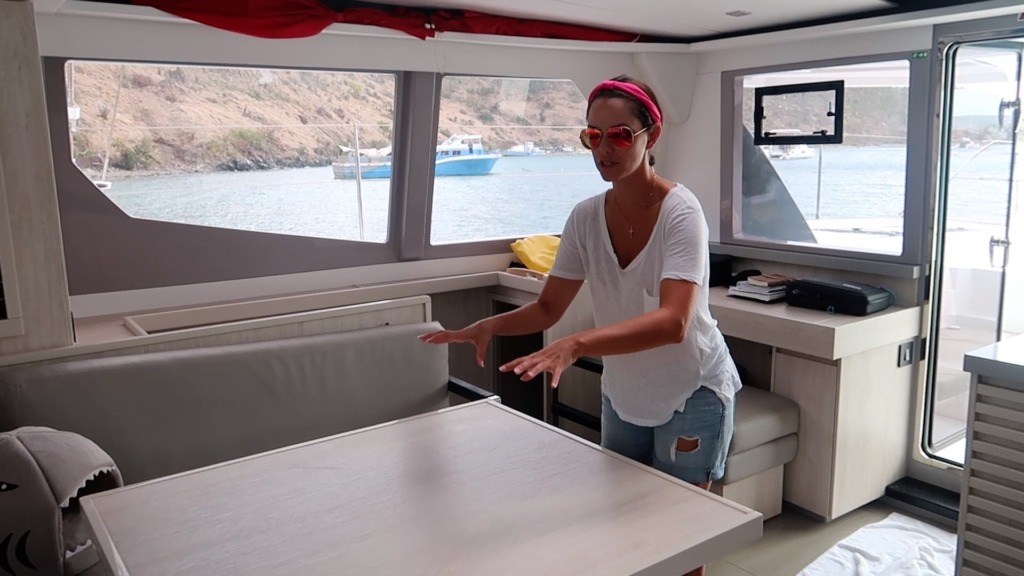 The galley and the saloon (or salon) is the same here. It’s open enough for multiple people to move around without having to squeeze by each other. It consists of a massive booth style dining table that doubles as an extra bunk, making it the 6th bed in the boat. The saloon also houses the navigation station and the control panel for the entire boat. 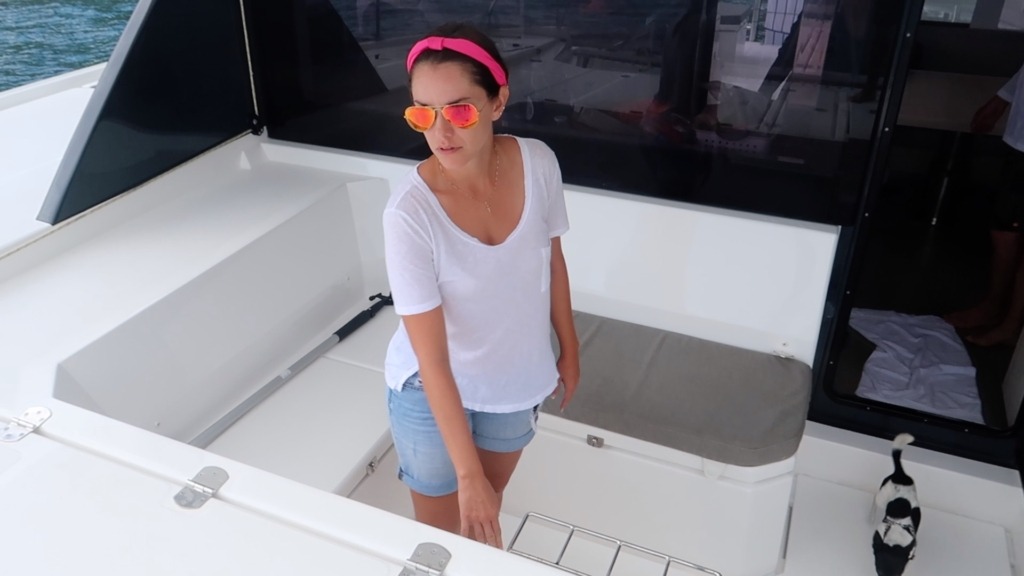 Probably the most unique feature of the Leopard 45 catamaran is the forward cockpit. A full sized door opens up to an additional sitting area with a fold up table, a great spot for morning coffee or an evening cocktail.

The extreme thinkers will claim that this area will “fill up” with water as soon as a giant wave overtakes the bow, compromising the safety of the vessel. But they also say the same thing about our center cockpit on Satori. We have yet to see anything come close to filling our cockpit, and I assume the same will be true about the Leopard Catamaran. 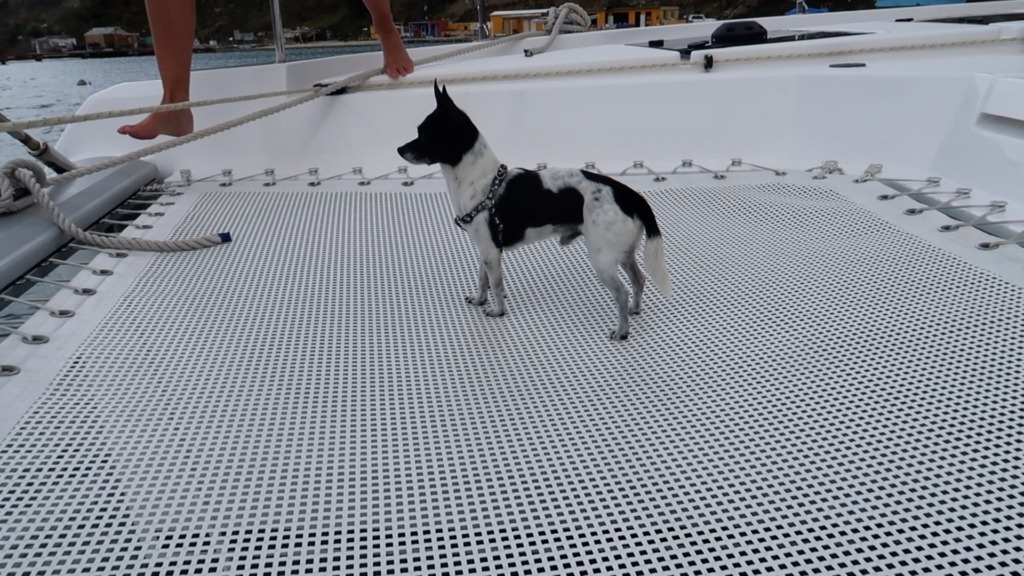 The foredeck also has large storage compartments for the freshwater tanks, onboard generator, and the required mass of pool noodles. 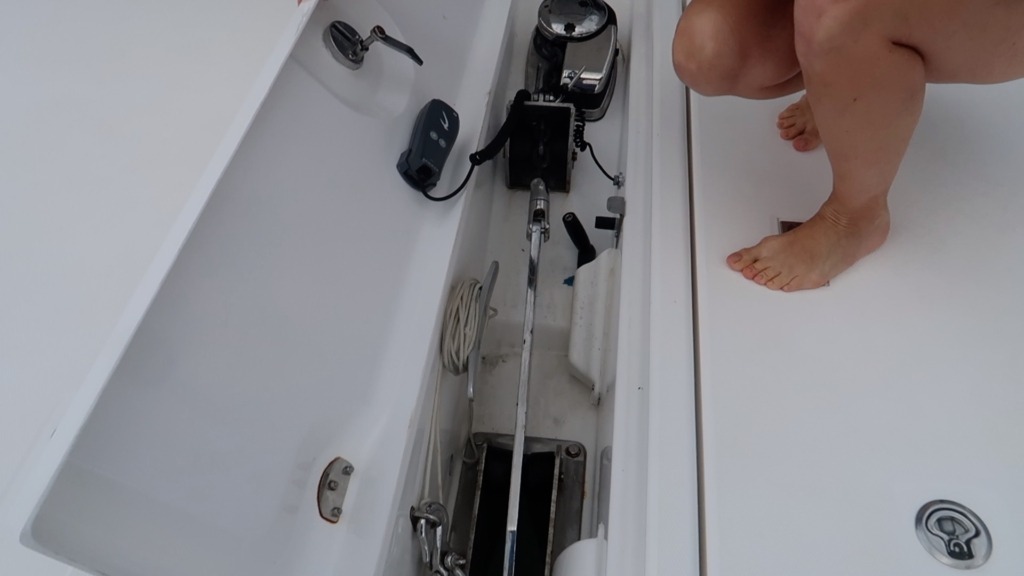 The anchor, windless, and bridles are also housed in a neat little compartment in the center. 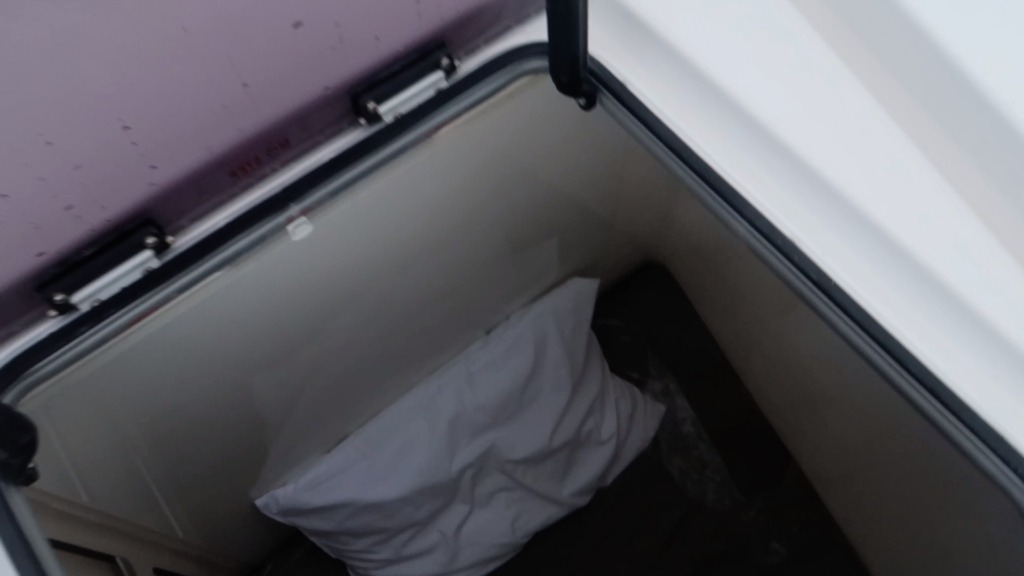 Wasting no space, Leopard catamarans has utilized the “v” section of each hull to be used by the crew on a full charter. The only way to access these sections of the boat is via a hatch on each side. The port hull contains a twin sized berth complete with cell phone chargers and air conditioning, while the starboard hull has a shower, head, and sink, making this the 5th head onboard. 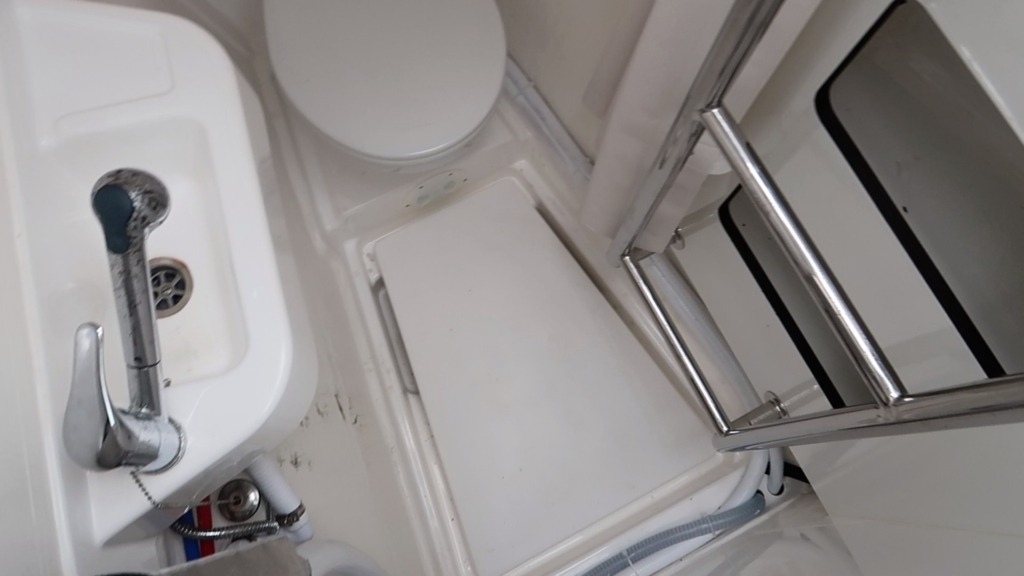 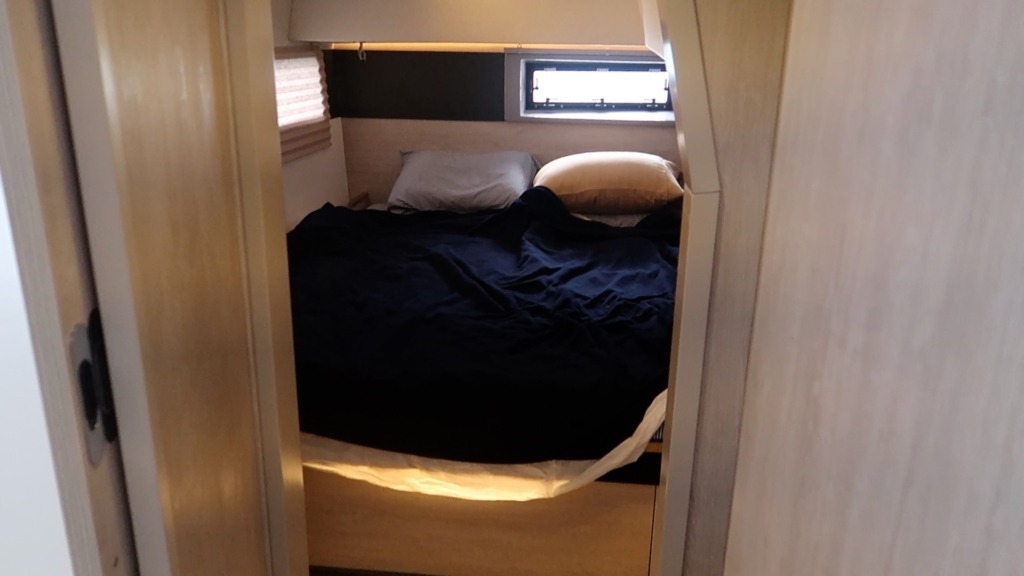 In my personal opinion, none of the guest cabins are as lovely as our aft cabin aboard Satori. That said, there are four aboard the Leopard 45 catamaran, each with its own bathroom and shower. Each hull has an en suite cabin aft and forward. Leopard catamarans also make a version of this boat that utilized one entire hull for the owner’s suite. Can you imagine the closet space in that beast? 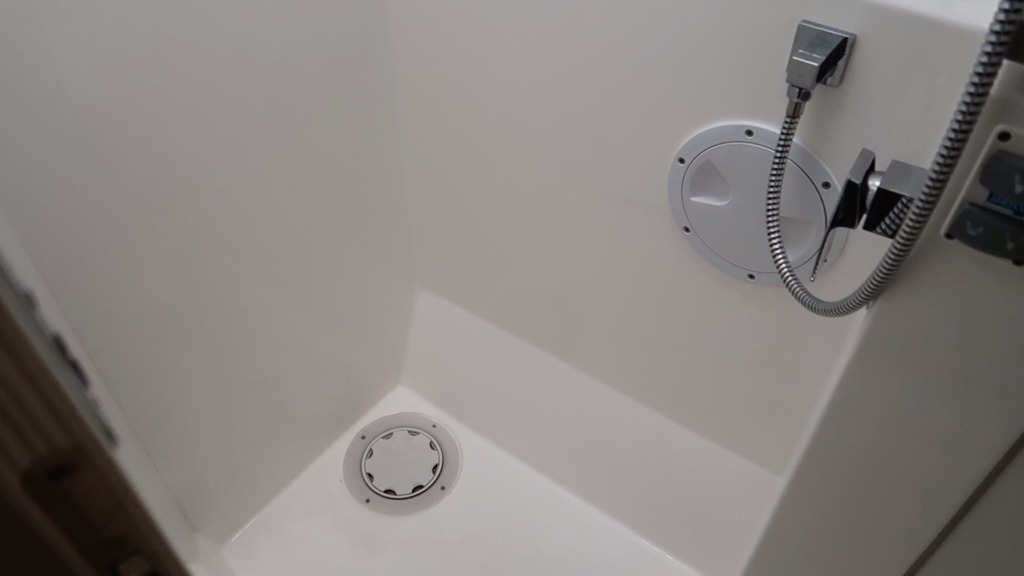 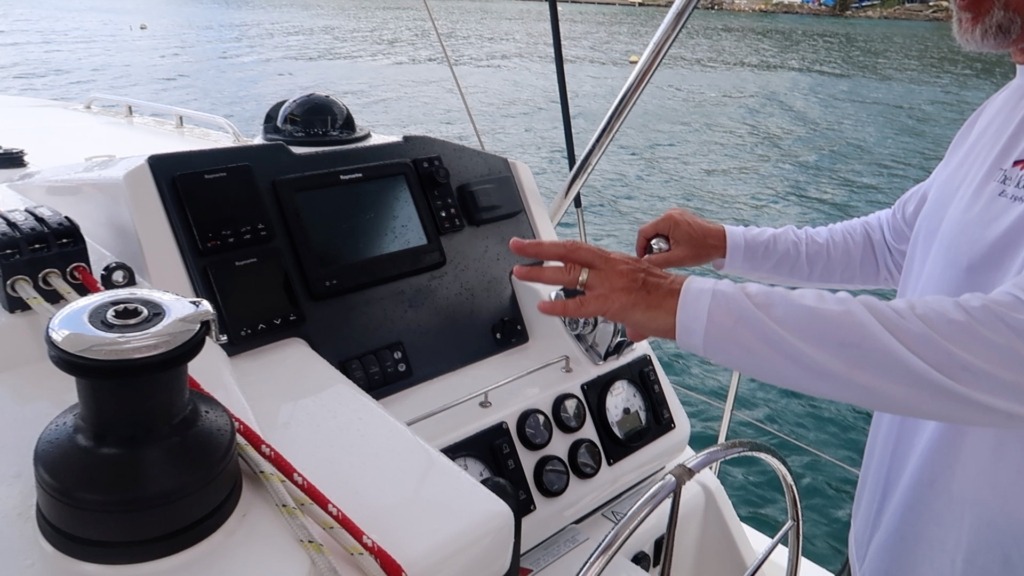 I was most surprised about the helm. Not surprising, having two electric winches that operate with a toe switch makes sailing a breeze, even when single handing. All of the lines a neatly organized and brought back to the winches. And all of the steering and engine controls are right there as well. 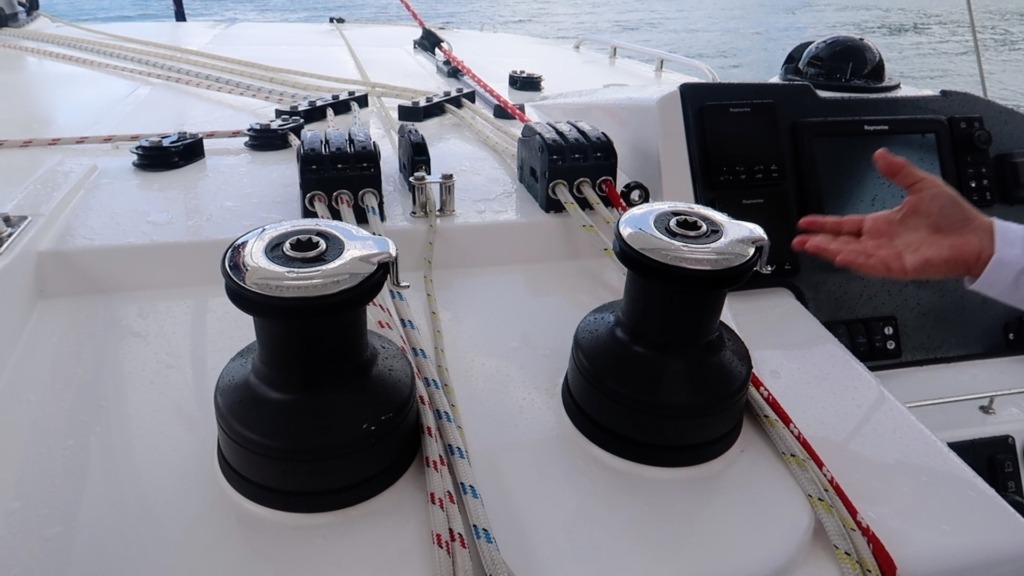 With the controls and winches conveniently located, I expected it to be easy to operate the sails, but I was pleasantly surprised by how well she sailed. I think this is because I had heard many horror stories about the awkward “hobby horsing” motion catamarans get and how hard it to sail close to the wind. 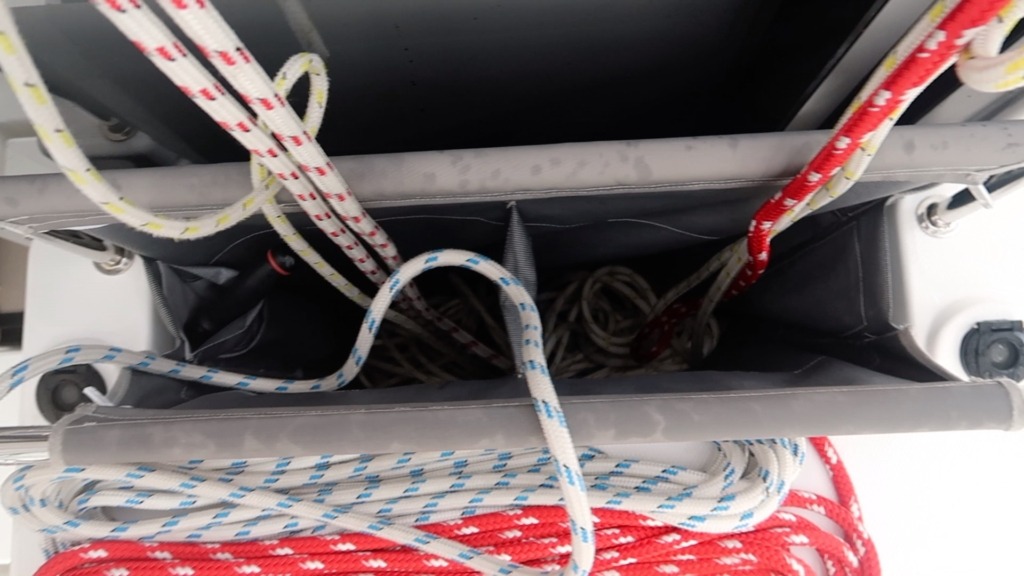 I didn’t see either of these problems but then were in the protected champagne sailing waters of the British Virgin Islands. An actual test would be to take her down the Thorny Path from Florida to the Virgins. I’ll let you know when Leopard Catamarans decides to sponsor Sailing Satori, but I wouldn’t hold my breath.